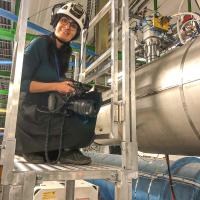 An audiovisual director formed in Barcelona, moved to Czech Republic and landed in Geneva as an audiovisual producer at CERN's communication team. She has produced more than 400 videos for social media, press, the website and also worked with external producers. She also won a Lovie Award for one of the CERN's videos done for outreach, Collide.

While working at CERN, she also got a degree in Communications and a Master's degree in Knowledge Transfer, specialising in how we disseminate knowledge with images. Nowadays, she is working on the CASopedia project, and you can see her recording some lectures at the CAS schools.